Forgespring is a city located in Waterfall. It is a new area in Inverted Fate, as it did not exist in the original Undertale. In order to enter, one must enter a passcode. It was constructed in the aftermath of the Waterfall Incident as a safe and secure home for residents of Waterfall.

Not long after meeting Mettaton and briefly visiting Napstablook's house, they offered Frisk a 'tour of their hometown', which they accepted. The three of them ventured through Forgespring, while Mettaton claimed that Frisk was either his new intern or an actor who would be in his show at some point, done in order to hide the fact that Frisk was a human that Mettaton was harboring.

As the three traveled, they came across a statue of Toriel, the Mage and Gerson, and discussed about the three heroes, with Mettaton hinting at the fact that the Mage was actually a human. The trio later arrived at the school at which Mettaton, Napstablook, Alphys, Undyne and the other residents of Forgespring had studied at. Napstablook recounted how it used to be nice there, until Undyne leaked the tapes. They also discussed how the school's curriculum had recently begun to focus on combat due to students' increasing desire to join the Royal Guard, which Napstablook did not understand.

The trio then passed by Spout Wassar. While Frisk wished to shop at Itsy & Bitsy, Wassar's shop, Mettaton did not allow it due to considering Wassar a con-artist. However, at the recommendation of a Royal Guard member named Cala, Frisk did shop at "Masa's place." However, due Frisk’s inability to afford any of Masa's wares, they simply talk to Masa, who told Frisk about Forgespring's history and gave his opinions of Mettaton and Undyne.

Frisk, Napstablook, and Mettaton then travelled North and encountered Shyren, who was preparing for a performance that were to take place after the ‘surprise in Hotland’. Mettaton then stated that he would be announcing something important in the future, and hinted to various monsters that he would soon have a humanoid form.

The three then travelled to the town's cemetery, where they encountered Gerson, who was unsuccessfully attempting to convince the Snowdin Trio to leave until Mettaton reminded the teens they should be preparing for their testimonies in the upcoming trial. Mettaton and co. then talked to Gerson, who quickly revealed he was aware that Frisk is a human. However, Gerson assured Frisk that he is accepting of the fact that Frisk is human, and warned Frisk that they should neither blame themselves for past humans' actions, nor should they seek punishment. Gerson then explained that the cemetery was a memorial for those who perished during the Waterfall Incident, and that the objects in the cemetary once belonged to the victims. Gerson stated that he saw Alphys pass by his shop, and encouraged Frisk to "Save Alphys from herself", and to buy some items.

Frisk, Mettaton, and Napstablook continued through Forgespring, and encountered Monster Kid near Undyne's house. Monster Kid explained that the Royal Guard put them in Forgespring because they believed it would be safe. However, they claimed they were willing to remain there due to Undyne's former home being located there, despite being surrounded by force fields. Mettaton warned Frisk to stay away from the house due to there being cameras on it. The trio then continued to interact with other Monsters there.As Mettaton was about to send Frisk off to continue toward Hotland, PAPYRUS arrived. Papyrus hugged Frisk, not noticing Mettaton. Mettaton stated that he was glad that Papyrus was there, but that Mettaton must leave them. The group agreed that they will meet again in Hotland, but were aware that it would be in different circumstances due to how Mettaton would have to act as Frisk and Papyrus's adversary.

After their stay at MTT Resort and Spa, Frisk and Papyrus later returned to Forgespring by taking the Riverboat (though not without a bit of frustration on Papyrus’ part fir the RiverPerson’s earlier absence) for some “last minute backtracking”. After their arrival, they immediately went for Itsy & Bitsy, Spout Wassar’s shop, Upon their entry to the store, Spout mockingly greeted the duo before bursting into a fit of laughter. Frisk buys the Basket Case and then talks to Spout about himself, his relation to Papyrus, and other things.

Back at Forgespring, Mettaton was preparing for his upcoming performance, and recalled his memories of the events of the original Determinator fight, and his amalgamation with Undyne in its aftermath. He knew he shouldn't have been able to remember it, pondering if it was a dream once more, but decided against it being so as he had amalgamated with Undyne and she had perfect recollection. Sighing, he felt unsure on what he was going to do.

Noticing his gloomy expression, Shyren and Napstablook came to his side. Although he was briefly surprised by their sudden appearance, he quickly calmed down and asked them about the preparations. After updating him on their progress, they questioned whether he was doing okay. Despite his claims, they remained unconvinced and reminded him that if something was bothering him, he could simply tell them. Despite their concerns, Mettaton brushed them off, claiming they were simply a case of pre-show jitters and anticipation for his upcoming date.

Still worried about him, Napstablook suggested they talk later and the two of them departed. After they left, Mettaton’s expression turned forlorn once more, as he told himself it was better they didn’t know, as even he wished he didn’t. As he told himself not to let the doom and gloom get to him, he reminded himself he still owed Papyrus the ultimate dating experience.

After taking the Riverboat, Frisk and Papyrus arrived at Forgespring, now decked with MTT posters. After asking several of the town’s residents about MTT’s whereabouts, the duo encountered Bratty and Catty, who offered help for their date with Mettaton and requested they give a recap afterward, although their dating advice turned out to be terrible. Outside Undyne’s old house, the duo encountered a disgruntled and worried Mad Mew Mew, who was concerned about the scientist’s wellbeing and was mad about how the town was “too busy gushing about Mettaton to care”.

At the town’s cemetery, Frisk and Papyrus encountered Napstablook and Shyren, who were in the middle of a discussion. Although they were relieved to see that they were okay, Napstablook began to feel guilty over not being able to help them, while Papyrus reminded the ghost that they had done plenty to help Frisk, with them being the reason why MTT saved them from Bratty and Catty in Waterfall. Asking for Mettaton’s whereabouts once more, Napstablook suggested he was getting ready at the gazebo, and congratulated them and wished them good luck on their date as dates were kind of tough. However, Papyrus expressed surprise that Napstablook and Shyren’s gathering wasn’t a date, briefly distressing the two. After Frisk mentioned how Papyrus made a real-life dating simulator once, the duo went off to find Mettaton. 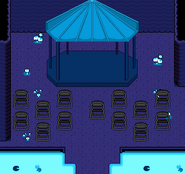