Fort Aquarius
Fort Aquarius is a Royal Guard fortress stationed in Waterfall. It was built in the aftermath of the Waterfall Incident and is the primary base of defense for the rest of the Underground beyond Snowdin.

It is home to the Aquarius Unit of the Royal Guard, who are far more threatening than Snowdin's Canine Unit, and it is primarily under the jurisdiction of Captain Alphys and Sergeant Bassiere von Dohj III.

After their date with Sans, Frisk intended to take the riverboat with Papyrus straight to Waterfall. However, they soon found the Riverperson was away from their post. While the duo considered turning back, Flowey urged them to press onward. After all, Papyrus knew his way around- what was the worst that could happen?

Unfortunately, they'd soon find the fort under severe lockdown. Sergeant Dohj refused to let anyone enter and even urged Papyrus to escort the plucky young Monster Kid back home.

Instead, the two took a secret passageway, sneaking into the fort's dungeons, and while all seemed well at first, they soon encountered the menacing Knight Knight, forcing the duo to engage in combat. They ultimately lulled her to sleep, stole her keys, and locked her away, and the two pressed on to explore the rest of the fort.

However, with so much ground to cover, the two ultimately split up- though not before Papyrus offered Frisk some upgrades to their phone, including a stealth B.A.R.R.E.L. and a special comm-link to keep in touch as they parted ways.

So, while Frisk explored the treacherous halls of the fortress and snuck past guards and all manner of obstacles, Papyrus hacked the power grids, darkening the fort and disabling hurdles to aid Frisk on their journey. Along the way, many a royal guard challenged the human, and several scattered books shed light on the Underground's tragic history with humans. Particularly the Waterfall Incident and Chara.

Eventually, Papyrus and Frisk reconvened in the kitchen, where they joined forces to convince Royal Guards 01 and 02 to confess their feelings to one another. After their brief victory, they proceeded to the fort's highest levels, where they briefly stopped to look around the Meeting Room before proceeding to Alphys' office.

They didn't get much time to explore before Alphys, Bratty and Catty arrived, forcing them to take cover. And as they hid, they overheard the conversation between the three girls and learned of Alphys' insecurities and suffering.

Once she left, they took the keys and proceeded to the top of the fort, where Dohj took a stand against the intruders. After a grueling battle, Sans arrived to try and bail them out of trouble, only for the rest of the guard to arrive. At the last second, Papyrus combined chemicals to make a smoke bomb, and he, Frisk, and Flowey all fled into Waterfall proper. 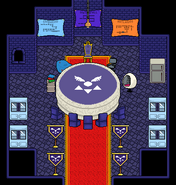 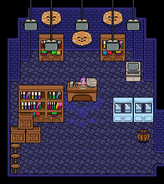 Top of the Fort
Community content is available under CC-BY-SA unless otherwise noted.
Advertisement