Inverted Fate takes place after a failed pacifist run. Asriel won the final battle and started to reset time, but lost control of his powers, resulting in the six main characters or "lost souls" swapping places but not personalities. This ends up creating a very different Underground.

It began publication as a sprite comic in 2016, and as of late 2018 is still receiving regular updates. It includes a website with integrated background music for immersive reading.

At the end of the final True Pacifist Battle, Frisk loses against Asriel. Though he tries to take their SOUL and reset reality, his inexperience with the full extent of his god-like powers coupled with him trying to accomplish such an incredible feat results in the power running out of control. Reality itself reassembles, with the six main monsters (or Lost SOULs) being thrust into entirely new lives, with their choices drastically changing the underground as a result.

Flowey awakens in the Ruins, reverted to flower form and lacking human SOULs. Before Frisk's arrival, he has just enough time to pick up on a few details- that this is a new world, that Asgore is in charge of the Ruins, Mettaton is kinder and keeps in touch with his family, and... not much else. When Frisk returns, he assumes they'll remember, as they always did before, but when they appear to have no recollection, Flowey decides to change his plan. Since the human doesn't remember him, they don't know what he's capable of, but since they are still the same kid, they possess control of the timeline. Ergo, Flowey "befriends" Frisk so that he can take advantage of both their kindness and their power as they explore this new world and make their way toward the human SOULs.

Though his efforts are briefly halted by the appearance of Asgore, now the Ruins' kindly caretaker, he soon pulls Frisk aside, promising them that if they work together, they can free monsters without human casualty and Frisk will be a hero. Insecure and desperate to mean something to at least one person, accepts his offer and his friendship, thus beginning a long and arduous journey through the Underground.

Little do either of them realize, Chara resides within Frisk's SOUL, and they remember everything that transpired before.

Throughout their journey, Flowey lurks in the shadows, but helps Frisk through various difficulties including death. They encounter Napstablook instead of the dummy in canon who, along with Frisk, does an impromptu show for some of the Ruins monsters; they later explain the savage nature of monsters outside the underground. In Snowdin, Frisk encounters their next valiant ally, THE GREAT PAPYRUS. The duo encounters a trio of troublesome teens bullying a snowman. In an attempt to save the snowman, Frisk steps in and threatens the trio with "killer human magic". When they refuse to back down, Flowey sends pellets raining on them, causing the teens to run. Flowey then secretly lets PAPYRUS in on the plan to free monsters, but begs him to be silent. As a result of the secrecy, sans refuses to let the duo exit Snowdin. They encounter and best the Canine Unit, now upgraded with gadgets and Jerry who is still the same as his obnoxious canon self.

Frisk in their various outfits 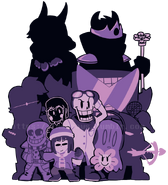 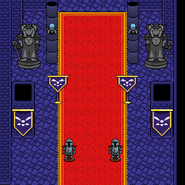 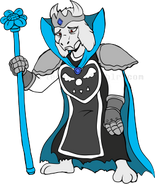 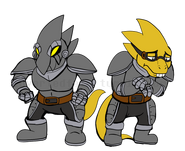 MTT has been affected the most by the swaps

Mad dummy is now a robot

Community content is available under CC-BY-SA unless otherwise noted.
Advertisement